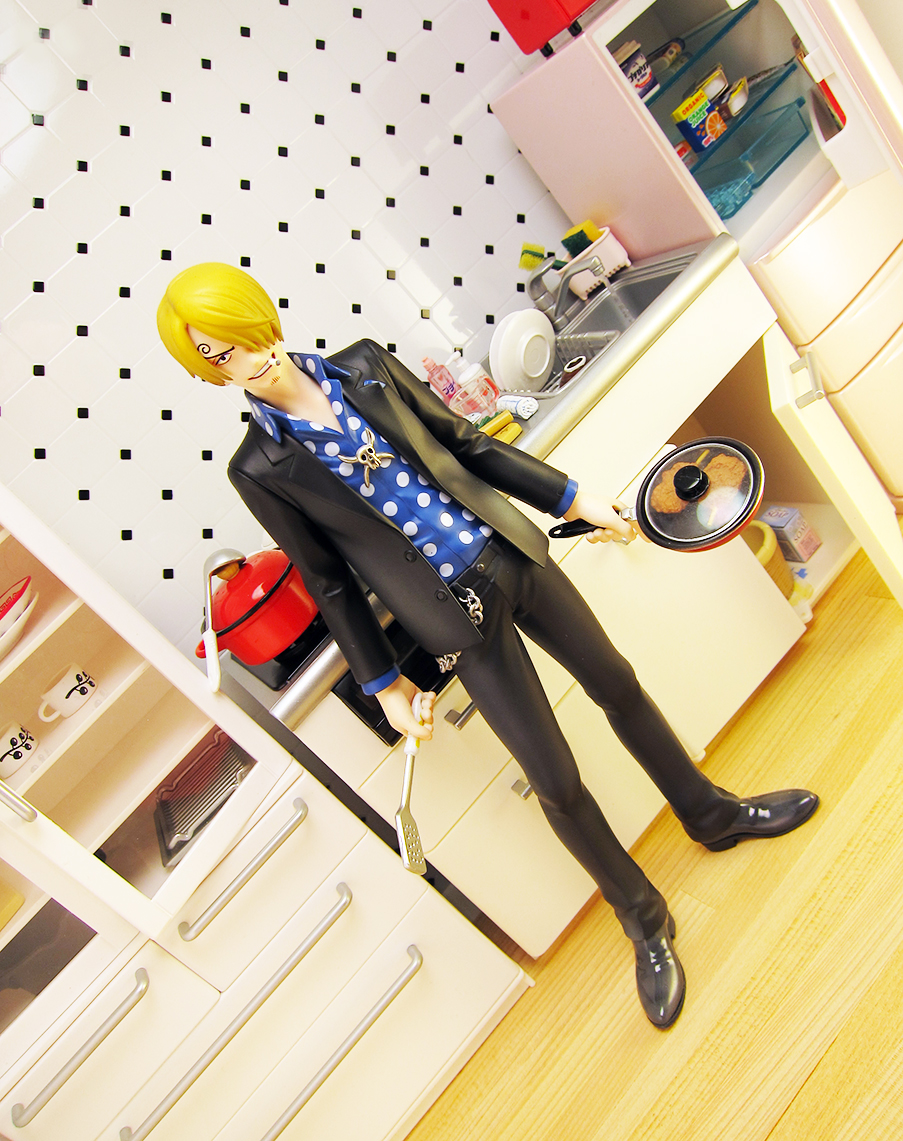 Drizzyrissy
If you dont mind me asking what brand of miniature pans did you use? If you remember lol! I dont want to pose him with his guns but it looks weird without anything
4 år siden

maggie
charle • 7 år siden • #1431590You capture him and the kitchen environment so well, congrats on Picture of the Day! It's great how all the utensils fits in his hands so well! Everyone wants a piece of what Sanji's cooking...or him!

Thank you!! Actually I had packed the spatula and pan in his box, and when I opened him they spilled out into my hoard of broken-down boxes (to reuse), it was like a needle in a haystack! I tried a few other accessories but they didn't fit, it had to be the ones I had picked out for him originally. Luckily I found them pretty quickly, somehow!
7 år siden

charle
You capture him and the kitchen environment so well, congrats on Picture of the Day! It's great how all the utensils fits in his hands so well! Everyone wants a piece of what Sanji's cooking...or him!
7 år siden

Kirjava444
Ahh! It made picture of the day!

khatt
Love seein' Sanji in his favorite space! That look on his face tells me he's got something extra tasty to serve up! Mmmmm..Sanji's cooking!
7 år siden

Akira • 7 år siden • #1430278You're so evil, you know? Encouraging me to read One Piece... ;v; And to make the matters worse, this figure is from MegaHouse and has cool weapons!
I'm doomed. Really doomed.
MWAHAHAHA!!! A lot if Sanji POPs are pretty cheap, snap them up! And get reading! There is a hoard of one piece merch that awaits you to bask in its glory...

Shinoko • 7 år siden • #1430338Wonderful job! I really love the figure and the surroundings! I wish he would make a meal for me. T^T That would be so fantastic, and I would be able to die a happy woman. ^^;
Thanks! Do you realize how happy Sanji would be to hear you say that??
Jetspectacular • 7 år siden • #1430396HUSBANDO!!!!!!!!! nice space, I'm jealous! My kitchen isn't nearly as badass or spacious!
Well, mine doesn't have a table so we're even!! LOL husbando
andypandy • 7 år siden • #1430446Great! Where does all the kitchen stuff come from? You had it lying around, since childhood, or...?
No, it's a kitchen by a brand called Re-Ment, it's sold at hlj and amiami. So, definitely not since childhood!! I was more of a ninja turtle girl XD
Milkbiscuit • 7 år siden • #1430530Ok this clinches it. I've admired your photos before, but a photoshoot of the best pirate chef ever?? Subscribed.
WOW thank you!! What a great compliment! He is totally the best pirate chef ever, I can't take all the credit here obviously :-p
bipalium • 7 år siden • #1430536Very nice photoshoot) I think you should do a photo from the back, as if Sanji was busy with his cooking and spectator was just passing by)
Yes, I did do that but you couldn't tell it was Sanji and he seemed even more static that way. I show my boyfriend my pictures to narrow them down and he nixed all of those. My friend suggested to put my NEO Sanji in the setup, and I think that would work better for those purposes. Maybe I can add Nami rifling through the fridge ^o^
neo_valkyrie • 7 år siden • #1430551This is so creative. Love it. :D
Thank you!!
rindo • 7 år siden • #1430563sometimes chef always make sure that all of customer already done for eating.
when they did, he always eat later
most of scene when they eat,sanji always serve robin and nami.
Yes, a true chef! I think if he's always waiting on the ladies it's hard for him to find time to eat! I wonder if he eats while he's cooking, I'm always guilty of that!
jkb • 7 år siden • #1430596Sanji in a home kitchen ?! haha
Great job for details !
Thank you! If only he were real I'd have him make me mini meals all the time...
Kuuga • 7 år siden • #1430610If you smelllll....the Sanji is cooking :D
I wish! I wonder what One Piece food tastes like?
7 år siden⊛

Kuuga
If you smelllll....the Sanji is cooking :D
7 år siden

Except where otherwise noted, pictures are licensed under a Creative Commons By-NC-ND License.