Welcome to my profile! 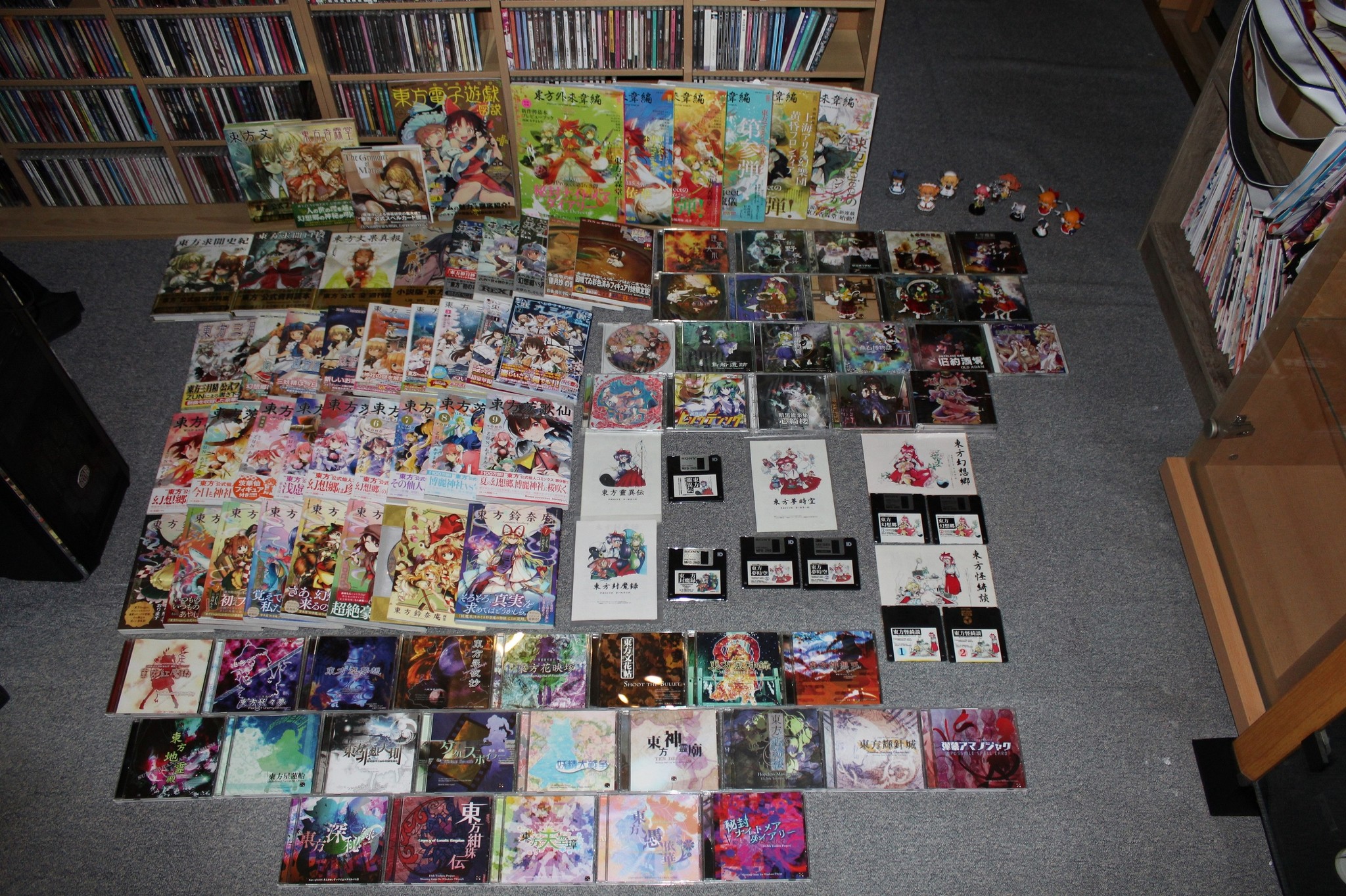 As you can see, my collection mostly consists of merchandise related to Touhou Project with a strong focus on official goods and, of course, figures, other merchandise and, mainly, Doujinshi.

I also enjoy playing the Touhou games and have recently begun uploading older replays to Youtube (see my channel in the upper right if you're interested!) and, after a longer hiatus, want to finally tackle the games I have yet to play on the highest difficulty level.

In addition to that, I strongly enjoy adding new entries to the database and engaging in (hopefully) friendly exchanges on certain rules and problematic entries, though right now I primarily hope that one day, we'll be able to add Doujin CD's and games among other media, but that's for the future.

As for my collection, in recent times, I have, once again, only been focusing on the series I have favourited, but again, the primary focus will always be Touhou Project, a series I have been enjoying since early 2009 when I first discovered it, focusing on collecting the games, music CD's, various merchandise, Doujinshi and eventually figures, though the latter have mostly died out, unfortunately.

Either way, should you have any questions or anything you want to talk about, please feel free to contact me anytime.

Parsee
Sorry for the late response, was wrapping up my semester and finished just recently! Finally have some time to take a break. Haha, it’d be nice if I could handle both, but I’m a full time student now. I’ll probably be working part time over my breaks, but it’ll be a lot more doable to have some free time now than when I’m in school.

It’d be great if you can get plenty of time off for the upcoming holidays. I hope you have a great time with friends and family!

I can definitely relate to that; the darkness outside can make home cozier in a way. I also like Winter and Autumn cause my childhood home got a lot of snow and there were a lot of trees to play around with, so have a lot of fond memories.

t’s my first time moving to a big city coming to school on my end, definitely say I can’t wait to travel out of the urban area into nature, missed it a lot. It’s a bit too crowded and dirty for my personal tastes.

In any case, hope you have a great week, till next time!
1 måned siden

Parsee
I see, well glad that it’s been an overall net positive! I hope your sleep gets a bit more normalized, I’ve been irregularly sleeping as well and wish to get it back on track. The weather here’s been getting chillier and it’s getting darker quicker too, so staying indoors is the ideal here.

I’ve been doing fine! It’s been pretty busy on my end, went back to school this year in order to get my graduate, but I’m hoping I can keep it up! Hope things go well at work on your end!
2 måneder siden

Onexpiece_hearts
Hi I sent you a message and I was wondering if you could look at it when you get the chance and possibly help me? Thank you
5 måneder siden

Parsee
Yay, I hope you have fun with the new games when you get around to them!

Pathing out the games is always the best part of playing for me, sometimes simple can be for the best. I like to see my own progress in getting a bit further with each and every run!

Yeah, I can’t help but see your point there. I do feel at times that LoLK’s difficulty is supposed to be compensated by the saves you get in Point Device mode, but that can definitely feel a bit off. I guess it can feel as though LoLK’s legacy mode wasn’t the primary focus of development, which sucks for the people who play that mode.

Haha, wow I can’t imagine how many runs it took you to attain mastery of UFO. The UFO system leaves for some variables in collecting items and clearing screens, and I wish that I could get better at using that system to get me further. Ahh, both the feeling of joy and trauma of playing the games is something I can really get behind!

Right, I totally understand how that can put someone off. At the very least though, as you’ve confirmed, there isn’t another game with that kind of system. Most of the games after LoLK stick to the basic formula, though UM has a lot more experimentation and can feel closer to the side games. In the case of UM, I feel as though it plays similarly to ISC in terms of how you are offered a variety of cards to use in different situations much like how Seija is given tools to beat spells.

Ahh, that feels like the LoLK experience for sure. You’ll need as much as you can get to get through some of the hardest spells later in the game, even for me who played on Point Device I had to save up bombs to use on the final two stages or basically be soft locked without much means to progress. It’d definitely be challenging but getting to the level where you can tackle on capturing spell cards will be really impressive. I hope it’ll work out for you if you decide to focus on LoLK!
8 måneder siden

Parsee
Yes, I shall keep a firm heart!

IN is super fun, lots of teams, plus the spell replay feature is something I wish other games implemented. Tons of other things like Last Word spells make it really great! PoFV can be chaotic fun, and UFO was challenging for me but in a good way! Good memories of dying to Shou and Byakuren again and again. I've also focused more on the older games, but the newer games are still fun to play, messing with the animal spirit system in WBWC was interesting. The new shop system in the most recent game leaves for a lot of flexibility in the variety of runs I think, though I've only tried the demo. If it's not too much trouble, let me know what you think when you get to them!

I can see why you would feel that way about LoLK, Legacy mode was a bit tough for me at the higher difficulties, but the save system makes it a lot more manageable. Though I guess it's enough of a drastic change from the old style that it can be jarring for some? At the very least, I thought it was cool how the game system was intertwined with the story at hand like IN's time system. Since technically you are supposed to beat Junko without getting hit once, haha. It was nice to hear your opinions about the games!
8 måneder siden

Parsee
Thanks for the advice! I hope to have a lot of fun with collecting! That’s very interesting to learn about your collecting. I don’t know exactly what I’ll be looking to collect, but I especially enjoy non-R18 works so I’ll probably lean into that area. There’s just so much derivative works available that I feel as though I also need to put a limit on what I’m getting!

I see, I also don’t have any particular favorites, there’s a lot of artists whose work I enjoy. I just really like to see how artists put their own spin on interpreting Touhou, and it’s really cool to see the variety. Though, the Personal Color works holds a little special place for getting me into Touhou doujins.

Yes, I do play the games, though I’m not too good at them! IN’s my favorite game to tackle, though all the games are super fun to path out. Haven’t devoted too much time these days, but I can’t wait to play the latest release once I get some free time in the coming weeks.
8 måneder siden

Parsee
Heyo, it's always nice to meet another Touhou-fan, glad to meet ya! Really impressed on your doujin collection, wowie! I've only collected a few from the artists I like haha, but hope to expand it a bit more myself. Do you have any favorite artists? In any case, really nice to meet ya once again! :)
9 måneder siden

pmendoza1995
Awesome will be taking a look might take a while though theres some many!
1 år siden
Se flere kommentarer