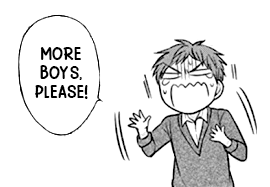 Dedicated to collecting all those beautiful boys.
Favourites are owned and ordered. (๑•͈ᴗ•͈)

Ordered figures and statues that aren't on MFC

Owned figures and statues that aren't on MFC

Wario54
Omg I’m so glad you enjoyed Hades too!! I can’t wait to pair the Zag Nendo with a Than! :D But I also literally just ordered a Pop Up Parade so…yes we are both liars. XD Genshin too omg… It actually looks prettier than I thought it would on PS4 ngl, but it also takes up a TON of space so whenever I see a new update I’m put off from installing for a while. ^^’ Barbara’s “music starto” and “Bobara iku yo” are my weakness though. ;__; If they make figures of the guys too, our wallets are screwed. .__.’ But as for actual console/PC games, I’ve been slacking lately… Literally just been playing Lost Judgment for the past month lol how about you?

Yes Killua’s love for Gon is so pure. <3 And whoa you actually got into BNHA! So much has changed. XD Should I give it another try too? You even cried for Rengoku? ;__; It’s like a layer of cynicism has been peeled away hahaha are you going to get figures of him then? He sports a pretty epic mullet tbh. And omg Spy x Family! I AGREE IT’S SO CUTE! I also watched Sk8 recently and fell in love with it. <3 Oh and the JJK movie yes! I was able to see it in theaters and loved it! Just perfect in every way IMO, definitely let me know your thoughts when you get the chance to see it!

Those birthday cards yesss I love them! Their initial birthday SSRs too with the white suits, I love them all. ;__; But the fact that Vil and Malleus scales haven’t even been announced yet is pretty disappointing. :( And yeah 2B and 9S are STUNNING! I still can’t get over how big and beautiful they are. XD OH I also started TeniPuri recently and noticed you have like all the scales?? I’m so jelly haha I want ITEM #132711 so bad. XD This is what I get for being so slow with getting into everything, first Free and now TeniPuri lol the cycle never ends.
28 dager siden

Wario54
Thank you sooo much! <3 And omg I wrote such a long essay, please don’t feel obligated to reply to all that. XD
1 måned siden

lunarlemons Dazai’s wife ♡˖⁺
ahh did you see him!? they released the photos of Ayato this morning. i think he’s beautiful.

AngelAssassin97
Thanks for the FR :D

I'm so jealous of your collection omg I need more good male figures in my life and you introduced me to some more of them, thanks bestie TwT
3 måneder siden

lunarlemons Dazai’s wife ♡˖⁺
does that mean you're excited for Ayato? :)
4 måneder siden

ty for the friend request :) also i agree, Zhongli figure when.
4 måneder siden⊛

Wario54
Okay I finally started Hades and it annoyed me so much at first, having to start over from the beginning after a really good run just destroyed me lol. But over time an addiction came over me and now I'm obsessed with it... It still confuses me how it became GOTY tbh because it doesn't seem like a game that would have such a wide appeal, but I love how all the weapons are fun to use and can even become super overpowered depending on the upgrades chosen, and then the gay romance was a pleasant surprise lol. Umm I only wanted to try Dark Souls first because it came first and seems like the gameplay in Bloodborne is exactly the same? I don't think they're actually connected or anything, but I might just skip to Bloodborne first anyway because that aesthetic appeals to me way more than the dark medieval thing. And I know nothing about LOTR but I'm seeing Elden Ring is inspired by it? So not really interested in that for now... ^^'

I don't even know where to start with Hisoka... He is just so creepy on so many levels lol. Do you have a favorite character? I'm partial to Killua because he's a scary boy but his love for Gon is so pure and adorable, and I also love Meruem. He's like a weirdly cute version of Cell from Dragon Ball lol. And the honor of my most hated character would have to go to Ging, what an ass. >:( Btw did the Free movie get pushed again? I thought it was supposed to come out soon? I'm hoping the Jujutsu Kaisen movie doesn't come out like a year later over here too. :( I'm too lazy to read the prequel manga but the plot is so hyped up... I see you ordered one of the Nendos already though! Idk who he is but he looks cute. ;__; I generally store Nendo boxes wherever there's room, scale figure boxes go up to the attic but I keep the Nendo boxes in case I want to use different parts...though that rarely happens lol... I like how the boxes look when filed in big drawers though! Very colorful and consistent. ^^ Older Nendo boxes on the other hand, not so much...

Omg yeah I'd love a figure of Vil with his hair down! The queen get-up is a little much with the robe and everything... I rolled for this card in the game twisted-wonderl... and ended up getting it so now all I need is a figure of it and my life will be complete. XD Oh yeah also I got 2B and WOW you weren't exaggerating about her size, she's a big girl. O_O She looks gorgeous though!! The fact that she towers over my other scales just makes her that much more impressive. XD Now I really can't wait to have 9S with her! Btw I hope you had a good holiday and may the new year bless us with more beautiful plastic! :D
4 måneder siden

indian_summer22
Thanks, though you are a day early xD Have nice day :)
5 måneder siden

Tokiha
You are so sweet! Thank you! (・∀・)
5 måneder siden

Wario54
I have Bloodborne but I haven't played it. ^^' I think the aesthetic looks cool at least, but I figure I have to play all the Dark Souls first so... I'll never get to it lol. Now that new From Software game with George RR Martin is all anyone can talk about and I still have no idea what makes these games so special. Your experience with it is making me think maybe I should lower my expectations though lol. In Hunter x Hunter I'm on the York New City arc (it probably has another name but I don't want to look it up in case I find spoilers haha). It's waaay weirder than I thought it would be, like the fact that there's so many weirdos in this world and nobody bats an eye makes me think of JoJo which I was not expecting. XD Gon and Killua are cute though!

You've got a point about Haru tbh, like swimming is his life but doing it casually suits him way more than the pressure of doing it professionally. Now I wanna see an alternate future where Haru chose art instead...and Rin loses his mind lol. Also I finally received ITEM #464652 and omg my heart, they're perfect. <3 Seriously one of my favorite figures. I'm still looking for Nagisa but in the meantime this figure is keeping me happy lol.

Yes MORE JJK! I love that Koto is even making a Panda scale lol, best bear getting his time to shine. Though outside of the two Gojos I still can't commit to any JJK scales because I'm not even sure how I'm going to fit all the Nendos in my display... I just keep ordering them. :S And it feels like GSC US is run by snails because I still haven't even gotten Yuuji yet. :( I only just got ITEM #1131732 recently (so cuuute), meanwhile my Naruto Nendo keeps getting delayed. </3

Leona was the least sympathetic of the chapter bosses IMO... Mabye I'm biased because he mistreated Ruggie while he was going insane but like bitch, hyena boy did everything for you!! >:( He's still beautiful though lol and I'm starting to warm up to him especially during the current story arc, he's actually pretty sweet in this one! Sacrificing himself for Ruggie and letting Riddle use his lap as a pillow awww. Where has this Leona been all this time?? Less tsun and more dere please. Did you read the Scarabia and Pomefiore stories too? Those ones are so good and now I want a Vil scale even more. ;__;
6 måneder siden
Se flere kommentarer 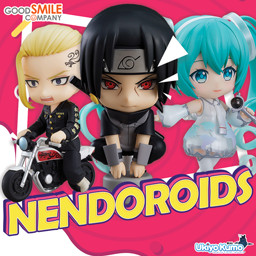